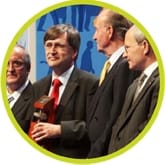 Pimec Prize for the most competitive company

Enantia is awarded the 2008 Pimec Prize (Premis Pimec) for the most competitive small company. This prize was given personally by the King of Spain Juan Carlos I to the then CEO Llorenç Rafecas during a dinner in Barcelona. Pimec is the association that represents the micro, small and medium-sized companies in Catalonia.